Since my last post, Halley made the decision to sail to the West Indies in the hope of finding a flag officer who could permit him to change those officers who had been giving him trouble, including mate and lieutenant, Edward Harrison, and boatswain, John Dodson. But when he reached the West Indies he found he was unable to do this without returning to England and so decided to abandon his voyage and return to London to petition “their Lopps” (lordships) to allow him to sail on a new voyage with different officers. He set sail north towards “Bermudas”, and is now crossing the Atlantic on a north-east course towards England, which he should reach in about a month’s time.

But before Halley arrives back in English waters I thought we should take a closer look at his ship, Paramore, which has been his home since leaving London last October.

I’ve written before about why I’m using the spelling Paramore, but what type of ship was she? how large? and what did she look like?

Paramore was a type of ship known as a pink, a square-rigged vessel with a narrow stern. She was built at Deptford dockyard by Fisher Harding, who had been Master Shipwright at Deptford since 1686. I don’t know why this type of ship was chosen, as pinks were apparently most suited to coastal and shallow waters and Halley’s original plan had been to sail round the world, but the most likely explanation is that pinks were capacious, providing proportionally large storage space, which would have been useful for a small ship that was expected to spend lengthy periods on the high seas.

The Admiralty ordered her construction on 12 July 1693 and she was completed by April 1694. Two entries in the Deptford Letter Book give specific information about her size and appearance. One tells us that she measured:

while the other entry details the dimensions of her yards and 3 masts (see below). [1] 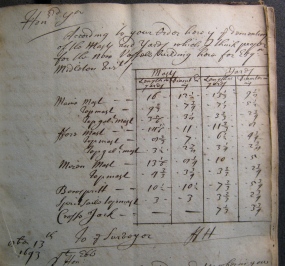 Paramore was an unrated vessel but she was listed with the 6th Rates in the monthly Disposition of Ships (a record of the whereabouts of the King’s ships at the 1st of each month).

Benjamin Middleton, the intended financier when the voyage was first proposed, was to be “consulted with about the conveniencies to be made in her for Men and Provisions” and there are several references to discussions with Middleton about the ship before he disappears from the project, though I haven’t come across anything specific in terms of, say, the number and layout of cabins.

When Paramore was being fitted out for Halley’s eventual departure in October 1698, she was mounted with “Six three Pounders of about four hundred Weight Each” and “Two Pattereroes” (small guns in swivels) and allowed a complement of 20 men.

In his log and letters from the early part of his voyage, Halley wrote that Paramore “proves an excellent Sea boat in bad Weather” but that she is “very Leewardly” and “goes to windward but indifferently”. The bad weather “opened some leaks which are considerable for a new shipp”, and Halley had to have these repaired and the sand ballast, which choked the pumps, changed for shingle before he could depart from the English coast.

Yet despite these problems, I’ve become rather fond of Paramore, and my favourite mental image is of the little ship sailing in company with Admiral Benbow’s squadron from Portsmouth to Madeira and being towed along by the Falmouth (“took a small Pink in Tow”).

I mentioned before that although Paramore was built specifically for Halley’s voyage, he was not her first captain – and that remarkable person will be the subject of my next post.